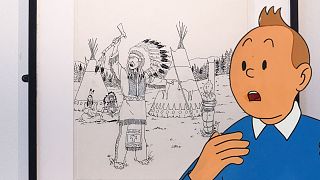 Known around the world for his blond quiff and daring adventures, the comic book hero is setting the art world astir with an original illustration that could set a new record at auction.

The 1942 black-and-white ink drawing by Belgian cartoonist and comics writer Hergé for the cover of the third volume in the series, 'Tintin in America', is set to go on sale in Paris next month.

The original illustration, which depicts a Native American chief pointing a finger at a tied-up Tintin, is set to be auctioned off by Artcurial, with an estimated selling price of between €2.2 to €3.2 million.

If sold at the top of the estimate, it would surpass the previous record for the most expensive comic book art ever sold, set by the 1936 cover of the Tintin adventure 'The Blue Lotus'.

The illustration, which was sold online by Artcurial in 2021, was painted using gouache, ink and watercolour and shows Tintin and his dog Snowy hiding in a porcelain jar, in front of a red dragon.

The upcoming sale for the cover of 'Tintin in America', one of the most popular Tintin books, is expected to attract high bids and potentially break the previous record.

"We are talking about drawings that belong to the history of art," said Vinciane de Traux, Artcurial's director for Belgium.

"Hergé is, along with (surrealist painter René) Magritte, the most important figure in Belgian art."

The illustration - put up for sale by an unidentified Belgian collector - is the centrepiece of Artcurial's auction in Paris on 10 February.

'Tintin in America' drawing to go on sale in Paris

Rare Tintin work fetches over half a million euros