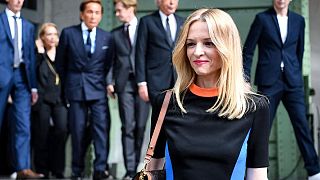 As the old adage goes – it’s not what you know, but who you know.

Of late, the internet has been asking itself some pretty searching questions regarding “ Nepo Babies ” (short for nepotism baby) – a term that has become popular after New York Magazine used it in a list of people in Hollywood. It refers to those whose careers have benefitted in no small way from family connections and have bagged high-ranking jobs because of them.

The latest figure to shine in a long list of nepo babies is Delphine Arnault, the daughter of Bernard Arnault - the 73-year-old CEO and chair of the €382 billion French luxury fashion and goods giant LVMH, Europe's most valuable company.

Delphine, 47, the eldest of Arnault’s five children, has been tapped to run LVMH’s second-biggest brand, Christian Dior, amid a top management reshuffle, a move that sees Arnault tightening his family's grip on the empire he co-founded 35 years ago.

The decision has stirred further questions about succession.

Bernard Arnault has not publicly named his successor, and many saw Delphine’s brother Antoine, 45, as the frontrunner - especially after his appointment last month as vice chairman of its board of directors, charged with running the holding company that controls LVMH.

Now, Delphine’s new role is seen by the fashion industry as starting an all-out succession battle between her and Antoine.

Not that this is new: analysts have frequently compared the competition between the Arnault children to that of the Roys in the hit TV show Succession.

And for good reason: all five of Bernard Arnault's children hold senior positions in LVMH and its brands (Stella McCartney, TAG Heuer, Bulgari and Tiffany).

Alexandre Arnault, 30, is an executive vice president at Tiffany & Co.; Frédéric Arnault, 28, serves as the CEO of Tag Heuer; and the youngest of the five siblings, Jean Arnault, 24, is the director of watches development and marketing at Louis Vuitton.

But Delphine Arnault has risen higher in the family business than her siblings.

She joined Christian Dior in 2001 and became an executive vice president at Louis Vuitton in 2013, in charge of supervising all of the brand’s product-related activities.

In her new role at Dior, she’ll work closely with Charles Delapalme, who now becomes managing director at the brand.

As part of the reshuffle, Arnaud has also promoted now-former Dior CEO Pietro Beccari, who has been the head of Dior since 2018.

Beccari is moving to replace long-time Louis Vuitton CEO Michael Burke, who is Arnault's longest-serving lieutenant and has also been chairman of jewellery label Tiffany. According to a company statement, he will continue to work alongside Bernard Arnault – although no information is currently available regarding his new role.

The announced changes come into effect in February.

Bernard Arnault has been having a good run recently.

The group reported a net profit of €6.5 billion in the first half of 2022, a 23-percent jump from record earnings in the same period the previous year. Sales rose 28 percent to €36.7 billion and shares in LVMH rose as much as 2% to hit new highs, as luxury companies have been boosted recently by the easing of COVID-19 restrictions in the key market: China.

As an added bonus, Arnault recently overtook Elon Musk as the world's richest person, with an estimated net worth of around €149 billion.

There are also no signs indicating that he plans to step back anytime soon.

Last year, LVMH lifted the age limit of its CEO from 75 to 80, allowing the family patriarch to stay at the helm until the rules are possibly changed once more.

Who are Europe's richest people?

Billionaire sells private jet after being tracked by Twitter activists