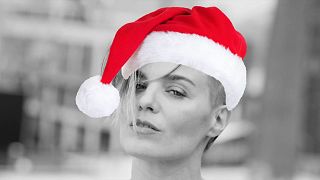 Gala Rizzatto, aka Gala, who proved a balm in dark times this year   -   Copyright  Gala - Theo Farrant
The opinions expressed in this article are those of the author and do not represent in any way the editorial position of Euronews.
By David Mouriquand  •  Updated: 27/12/2022

Our Cultural Advent Calendar continues until the end of the year, with our highs and lows of 2022. Today, the villains of the year and how a 90s Eurodance hit saved the day.

Bold statement, I know, but let it resonate with you.

Everywhere you looked this year, there was always a mighty powerful antagonist to chip away at your sanity.

Vladimir Putin and the atrocities the genocidal megalomaniac has committed in the last year; the revolving door of UK Tory prime ministers showing their complete ineptitude as empathetic human beings; Kanye West’s bullshit-spouting ways and overt racism; the bumbling and dangerous actions of insufferable tech bro Elon Musk who has cast himself as the most inept Bond villain ever, proving once and for all that enabling an ego-goblin is a lot like giving a toddler a harpoon and expecting things to turn out for the best.

There’s even the ridiculous bunch who still believe that jetting over to far away destinations to attend COP gatherings in order to hypocritically pontificate about the climate crisis and lecture the world about how we should all be better while being regaled to expensive meals and well-meaning dance performances about nature, is still a good idea. If any of them had an ounce of common sense, they’d realise that a simple video conference call would suffice, that the money spent on the meetings could be utilized elsewhere, and that the lack of a trip could already lower their carbon footprint.

One person was, however, a late entry for me in this abundant list of those who make me want to dive into a piranha-filled vat with weights on my feet - a man who seemed hell-bent on disproving Darwinism this year.

The 2022 World Cup was the stage of many a controversy, mostly regarding Qatar’s treatment of women, the LGBTQ community and the rights of migrant workers.

When asked about the controversies and Qatar’s less-than-stellar rap sheet when it comes to its human rights record, Infantino held the most unhinged, toe-curling press conference ever, a one-hour tirade held on the eve of the opening match which has played in my mind ever since the Swiss-Italian multi-millionaire uttered these words:

What fresh hell is this now?

You’re not and you saying so is deeply tone-deaf and offensive. But do go on.

So do I every time I listen to Shania Twain, but this is hardly the time and place.

“Today, I feel a migrant worker.”

No, you’re just the gibbering omelette who pockets a reported official annual salary of €2.7 million a year and has whitewashed the discrimination, inhuman working conditions and deaths of migrant laborers so you and your corrupt organization could fill your pockets. Around 6,000 died while helping to make the World Cup happen, and their families have been denied anything in the way of genuine compensation. You are not a migrant worker; you do, however, make Voldermort come off as misunderstood.

“As a child, at school, I was bullied because I had red hair,” he went on to say, in order to show that he understood oppression.

Yes, just so that's clear: Infantino – whose name is a wonderful example of nominative determinism – thought it was fine and dandy to compare being ginger to being a member of violently oppressed groups.

He cast himself as the poster boy for intolerance and bigotry, and in my eyes, has embodied the greed and corruption not only of FIFA, but of all those morally bankrupt men who think they can get away with murder.

But, because there always is a crack in everything that lets the light get in, to paraphrase Leonard Cohen, the aforementioned villains have their brighter counterparts.

Volodymyr Zelenskyy went from being a comedian to a wartime hero, showing the world what courage and resilience in the face of oppression looks like; a tattoo removal company has offered pro-bono Kanye West removals; the possibility that Musk might take Twitter down with him, and thereby rid the world of an increasingly toxic platform that seems to solely exist to provide meaningless affirmation, promote hate speech and peddle falsehoods, is a tantalizing one; and agree or not with the methods used by the Just Stop Oil activists who have made the headlines this year by throwing various liquids at artworks, the debates regarding their brand of civil disobedience only serve those who want to maintain the status quo – these are activists standing up for what they believe and alerting the world to an existential threat, something which should be taken seriously and applauded.

As for the positive counterpoint to everything the UK’s been going through this year, my imagination has its limits…

And in the case of Infantino, there were three positive flipsides that just about restored my sanity:

1) The German team covering their mouths before their match to protest against FIFA and the fact they couldn’t wear the "One Love" armbands to show support for the LGBTQ community.

2) This photo of Belgian Foreign Minister Hadja Lahbib wearing a "One Love" armband in front of the insufferably smug Infantino.

Pay special notice to the woman on the left in the background, who knows exactly what’s going on and whose gorgeous smiling eyes appear to say “Yes queen.”

3) Last but certainly not least, I name Gala and her 1996 Eurodance hit ‘Freed From Desire’, which became a surprise World Cup anthem this year.

The song by Italian singer-songwriter Gala Rizzatto brought me back to a time when all I could listen to was Now 34 (ie: the greatest compilation ever) and how I painstakingly copied the lyrics of the song from a Smash Hits magazine, making sure that I got the number of ‘na’s right when writing out the banger’s multiple “Na-na-na-na-na, na-na, na-na-na, na-na-na”s.

To this day I have no idea what it all means.

A celebration of a lover who is looking for love and freedom rather than money? An anti-capitalist call to arms? A Buddhist anthem?

Who knows? However, there was something truly heartwarming for me to hear this 90s madeleine de Proust, especially when considering how much of an LGBTQ anthem it has become and how, in France, the song has also regularly been played in demonstrations dedicated to sexist and sexual violence.

It's a long way from what was going on in Qatar and everything Infantino stands for — and that’s why it was a tonic for my tired ears.

Thank you Gala for providing some light in a dark, dark place.

All together now – and with the correct amount of ‘na’s, if you please: