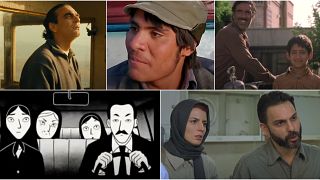 It’s been a tumultuous year for Iran, a nation shaken by protests following the death of 22-year old Masha Amini in September. Many have rallied against the country’s hijab laws, and showed signs of solidarity with the female population of Iran.

Even though there is high censorship, Iranian movies have garnered international attention over the years and present a unique opportunity for cinephiles to discover a vibrant cinematic language, as well as a window into a culture misunderstood by many in the Western world.

Many have probably heard the names of popular Iranian directors like Majid Majidi, Asgar Farhadi, Marjane Satrapi and Abbas Kiarostami, due to these filmmakers winning awards in prestigious international film festivals. They, like many others, continue to show to what extent the cinematic output of Iran is thriving. My colleague even elected one 2022 Iranian gem for our Top Films of the Year.

So, come Christmas, when you'll doubtlessly find some spare time to kick back after a big meal, we highly recommend you forgo whatever major Hollywood production you're thinking of watching and instead seek inspiration in our top 10 list of modern Iranian classics.

Many critics and cinephiles agree that this movie is the best Iranian movie of all time. Its screenplay, cinematography, and plot twists are absolutely amazing. "Baran" means "the rain" in Persian, and this 2001 film directed by Majid Majidi (the first Iranian director nominated at the Oscars) tells the tale of a construction site worker who falls in love with an Afghan worker, only to find out that it is a woman in disguise as a man, seeking to earn a living. The film won Best Film at the Montreal World Film Festival, and Best Screenplay & Best Director at the Gijon International Film Festival. It's a must-see.

This 2011 drama tells the story of a couple who wants to separate, but are denied divorce. It also deals with the depression their daughter goes through, as well as the plight of a care-giver hired to take care of the husband’s father, who is suffering from Alzheimer’s disease. Beautifully layered and told, it won the Oscar for Best Foreign Language Film in 2012, becoming the first Iranian film to win the award.

This beautiful animated biographical drama film is based on the Marjane Satrapi’s (who wrote and directed the film) autobiographical graphic novel of the same name. Set against the backdrop of the Iranian Revolution, it tells her story of growing up. The film co-won the Jury Prize at the 2007 Cannes Film Festival and was nominated for the Academy Award for Best Animated Feature.

The Lizard (in Persian, Marmoulak) is a 2004 Iranian comedy-drama directed by Kamal Tabrizi, and starring Parviz Parastui as Reza "the lizard" Mesghali, a small-time thief who escapes prison and poses as a Mullah. He has to stay in the role much longer than he expected, and inadvertently inspires villagers to perform good deeds. This is the first Iranian film that poked fun at the mullahs, as it satirizes the clergy, religion, Iranian society, and life in general.

Even though it's a French movie and was produced in Germany at the Babelsberg Studios in Potsdam, this makes our list because it was directed by Marjane Satrapi and Vincent Paronnaud. Chicken with Plums (Poulet aux prunes) is based on Satrapi's graphic novel of the same name. It follows how a famed musician, Nasser Ali Khan (Mathieu Amalric), loses the will to live when his violin breaks. Unable to find a replacement for the instrument, Nasser decides to retreat to his bed and await death. It's a beatuifully poetic and unmissable film that's well worth your time.

Another masterpiece by Majid Majidi, Children of Heaven is a 1997 Iranian family drama about a brother and sister and their adventures over a lost pair of shoes. It was nominated for the Academy Award for Best Foreign Language Film in 1998 and sadly lost to the Italian film Life Is Beautiful by Roberto Benigni. The film did reach an international audience following the Oscar nomination, and was shown in several European, South American, and Asian countries between 1999 and 2001.

In one of the greatest examples of reality and fiction blending in almost seamless ways, Abbas Kiarostami’s masterwork poses complex questions about identity. When a film buff impersonates his favorite director, a series of events unravel as he plans his next, fake, film. Surreally enough, the film is based on a true story and stars the actual people involved. It’s all brilliantly meta and a great watch.

Attending sporting events is prohibited for women in Iran, but that hasn't stopped many of them, who go as far as to dress like men to get in. Jafar Panahi's touching and insightful film takes place during the 2006 World Cup qualifying match between Iran and Bahrain, and follows several girls who, despite exclusion, cheer for their team as joyfully as any fan would.

Made by Abbas Kiarostami, this 1997 film is profound, frustrating and controversial. The movie tells the journey of a man who is searching for someone to bury him after he takes his own life. However, the movie leaves you with no answers in the end – so watch this brilliant film with fair warning. The film won the Palme d'Or at the 1997 Cannes Film Festival, which it shared with Shohei Imamura's Japanese masterpiece The Eel.

When ostrich farm worker Karim (played by Berlin’s Silver Bear winner Reza Naji) is forced to find a new job in the city to pay for his daughter’s hearing aid, Iran’s rural and urban realms collide. Thanks to the captivating grace that characterizes Majid Majidi’s films, poverty and misfortune are observed here not with pity but with an optimistic and undefeated perspective.

There we have it, and make sure to check out our review of another Iranian soon-to-be classic - this year's Jaddeh Khaki (Hit The Road), the debut film by Panah Panahi.

Happy screenings to you all.