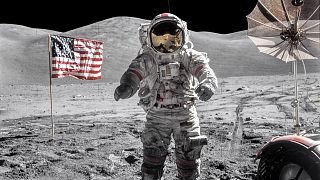 On this day 50 years ago, humanity last stepped foot on the Moon.

Neil Armstrong famously took the first human steps on the Moon in 1969. Following his Apollo 11 mission, five more crewed space missions would land on the Moon over the course of three years.

On 7 December 1972, Apollo 17, the final mission of NASA’s Apollo programme took off from Kennedy Space Centre in Florida, USA.

The spacecraft, piloted by Eugene Cernan, Ronald Evans and Harrison Schmitt, landed an orbiter on the Moon on 11 December. Cernan and Schmitt both spent time walking on the moon over the next three days.

Apollo 17 was a record-breaking mission. The crew spent longer on the lunar surface than ever before and included the longest ever Moon walks.

The crew also brought back the most Moon rock of any mission and set the lunar land speed record in the rover (a blistering 11.2mph) while covering the greatest distance - 19.3 miles.

“We believe, not too long into the future...we shall return, with peace and hope for all mankind,” Cenan said before getting back in the spacecraft.

To celebrate the 50th anniversary of the stunning human achievement, author Andy Saunders has remastered images of the final journey, bringing incredible details previously unseen by the public.

In some images, the moon appears orange instead of just grey.

“I’ve been obsessed with the Apollo missions since childhood. I always craved more and more information about the people who made the journey, the rockets, the spacecraft and I wanted to see more, to imagine what it would be like to make the journey myself,” Saunders said.

“When looking at old photographs of the Apollo missions, I used to become frustrated; the quality of images we usually see is very low resolution, because for half-a-century, every image we’ve seen in the media has been based on duplicate film (or copies of copies of the duplicates) and low-quality scans.”

“There are no photographs in existence that are more deserving of this level of care and attention,” he insists.

“The Moon is not entirely grey,” Saunders explains.

“It has colour; ranging from greeny-blues through to a tan colour. But on Apollo 17, they found and photographed something completely unexpected. Orange; I mean full-on orange soil! This was later discovered to be tiny spheres of volcanic glass, created as lava erupted from the Moon’s interior, 3.64 billion years ago,” he details of the amazing discovery.

Since the Apollo 17 mission, many spacecraft have landed on the Moon, but none have had human crews on board. Cernan is the last human to set foot on an extraterrestrial object.

In 2024, NASA plans to put a human on the Moon again with the third mission of the Artemis programme.

Considering the future missions and the plan to put the first woman on the Moon, Saunders is excited at the potential for even greater photographs.

“In today's digital world we can capture an almost limitless number of photographs, but back in the 60's we could get only 200 photographs per roll.”

“The Artemis crew have the opportunity to take amazing photography that will inspire people and get more people behind human spaceflight - to do that we need to see the crew themselves on the Moon. This type of photography was not a priority of the Apollo Missions,” he said.