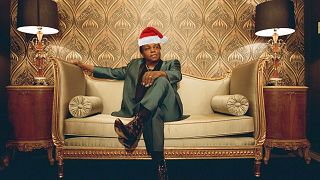 Our Cultural Advent Calendar 2022 slowly draws to a close for our top music picks (before we head to all things TV & streaming). The penultimate entry is one of this year's very best albums: Lee Fields' 'Sentimental Fool'.

When I moved from Berlin to Lyon this year, after nearly 10 years in the German capital, one of the first things I did during my exploring was attempt to find a decent record shop.

I’d been spoiled rotten in Berlin and I needed a good address. With a little bit of pootling and dawdling, I found the perfect one: the charming Tiki Vinyl Store on the slopes of the Croix-Rousse.

Fast forward a few weeks and I’d been coming in a few times and bought a couple of records from the very friendly owner, who not only knows his stuff but curates his varied selection amazingly well.

And on one particular day, I needed some proper retail therapy.

The new Taylor Swift on mahogany-coloured vinyl? I am who I am.

While I was accumulating my soon-to-be purchases, a record was spinning on the decks, providing the soundtrack for the shoppers. I found myself humming and swaying along to it. It sounded like an old-school soul album I’d never heard before but somehow felt familiar. Uplifting and passionate songs followed one another until I had to ask.

“THIS IS NEW?? It sounds like it came straight from the 70s!”

“I know, right? It’s by one of the unsung heroes of soul, a true legend. He’s worked with B.B. King, Kool and the Gang, Sharon Jones… He released his first record in 1969 and he’s been going ever since.”

I’d heard of – and love – his collaborators, but shamefully confessed I wasn’t familiar with this unsung hero of soul. But I ride for the underdog, always. So I ask for a copy.

“You’re in luck – the one playing is the last one I have. I’ve already sold four copies today by playing this album.”

Clearly this was a man well versed in his craft, one who could give Rob from Nick Hornby’s 'High Fidelity' a run for his money, when the fictional record shop owner shares with his friend “I will now sell four copies of ‘The Three EPs’ by The Beta Band”, before proceeding to play the songs for his customers, who predictably bop along to the tunes.

I buy my records, proceed to have a chinwag with the owner about our favourite concerts and the French gigging scene compared to the German one, and head out.

Later that evening, I put on my impromptu buy: ‘Sentimental Fool’ by Lee Fields.

It wasn’t an electroshock for the ears or something that purported to shake the foundations of the genre. But it was beautiful.

After the first listen, I did a bit of research.

The soul veteran’s career spans more than 50 years and 20 albums, and while ‘Sentimental Fool’ is his debut album for the famed New York label Daptone Records, the 72-year-old has seen it all. He only achieved the recognition he deserves in the early 2000s and has since been sampled by the likes of Travis Scott, Rick Ross and A$AP Rocky.

So much for riding for the underdog. This man is a true legend and I simply hadn’t caught up.

I put on the album once more, and as much as the first proper listen was great, this second spin was more of a revelation.

From the achingly romantic opening track ‘Forever’ to closing gospel ballad ‘Extraordinary Man’, Fields sings about loss and the finite nature of love, with echoes of Sam Cooke and Otis Redding (especially on the track ‘What Did I Do?’). And it all hit home. Maybe it’s because of Fields’ age that the classic themes of love and heartbreak are given more gravity through a lifetime’s worth of wisdom. Or maybe it’s because the lyrics are brilliantly to-the-point. Whatever it is, these songs make yearning tangible.

After the third listen, I began to think about how extraordinary it is that albums like these still get made. Considering the shelf life of any artist these days is inextricably linked to trends and online gimmicks, here is a man singing his heart out and, in the regretted absence of Charles Bradley and Sharon Jones, keeping authentic soul music alive. No eye-catching stunts, no empty posturing – just no-nonsense, authentic soul at its finest. What more do you need?

In the liner notes by Gabriel Roth aka Bosco Mann, the founder of Daptone Records and producer of the album, Roth writes:

“Lee often speaks about the fabric of the universe being full of electrons travelling in endless circles – atoms, galaxies, and even records all spinning along together in a sea of vibrations that connect everything,” shares Mann. “He believes that if he can create just the right waveforms with his voice, he can reach into the hearts of people forever with the grooves of this record, and steer them toward love, compassion, and humanity.”

An ambitious feat, no doubt, but Fields achieves what he set out to do.

'Sentimental Fool' is without a doubt one of my favourite albums of 2022, a tumultuous year in which we all could do with a bit more of that love, compassion, and humanity the soul man wants to steer his listeners towards. Let yourself be steered.