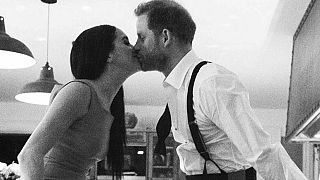 A trailer for Prince Harry and Meghan's Netflix docuseries has been released, offering a never-before-seen glimpse at the couple's love affair - from their first meeting to their decision to leave the UK and start a new life in America.

"No one sees what’s happening behind closed doors," says the Duke of Sussex in a sit-down interview, as a photo of Meghan crying while holding a cellphone is shown.

This is then followed by a dramatic cuts to a striking image of William and Kate, with the sound of glass breaking.

"I had to do everything I could to protect my family", he adds.

The teaser opens with a series of never-before-seen black and white images of Harry and Meghan - from a playful young couple in happier times to later more emotional and tense pictures of the Duchess of Sussex in tears.

Meghan asks later in the teaser: “When the stakes are this high, doesn’t it make more sense to hear the story from us?”.

The tell-all docuseries will be aired before the release of Prince Harry's highly-anticipated memoir, which is coming out 10 January 2023.

The release of the teaser comes against a troubling backdrop as the royal family are once again facing serious allegations of racism within the palace walls, surrounding comments made by longtime royal aide Lady Susan Hussey to a Black guest.

The Duke and Duchess of Sussex have spoken frequently about the racism Meghan is said to have experienced during her time as a working member of the royal family, most notably in the bombshell 2021 interview with Oprah Winfrey.

Furthermore, the trailer drop coincides with the Prince and Princess of Wales' first trip to the United States in eight years, as they begin engagements on their tour of Boston, to promote the future king's Earthshot prize.

Netflix is billing the six-part series as “an unprecedented and in-depth” look at “one of the most-discussed couples in history", and will feature commentary from friends and family, most of whom have never spoken publicly on the matter according to Netflix.

It is directed by Liz Garbus, the Emmy winning producer of the Netflix documentary What Happened, Miss Simone?, and is due to be released on Thursday 8 December.

Check out the video above for a look at the teaser trailer for 'Harry & Meghan'.