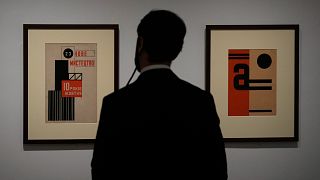 A man looks at artwork by Ukrainian artist Vasyl Yermilov called 'Nove Mystetstvo' during the inauguration of the Ukraine art exposition at the Thyssen-Bornemisza museum.   -  Copyright  AP
By Euronews  •  Updated: 30/11/2022

Under cover of darkness, two trucks were loaded with Ukrainian masterpieces in Kyiv earlier this month.

The trucks drove some 3,500 kilometres under Russian missiles and across borders to get to Spain, where the artwork will be temporarily on display.

The 70 artworks hanging in Spain’s Thyssen-Bornemisza National Museum is the largest collection of modern art to have ever left Ukraine.

The effort to get them there was so dangerous that no company was willing to insure them during the journey.

Despite the risks, Katia Denysova, one of the exhibition’s curators, says the evacuation was “super important for us as a way to protect our heritage, that we managed to take the works out of the war zone.”

An exhibition with presidential blessing

The central concept of the exhibit, “In The Eye Of The Hurricane: Modernism in Ukraine 1900-1930s,” was to counter Moscow’s narrative that Ukrainian art is really Russian.

And while any other international art exhibition would have taken several years to pull off, this show was organized in just a couple of months.

The journey was orchestrated by the National Art Museum of Ukraine and the Thyssen-Bornemisza National Museum, and was given the blessing of Ukraine’s president Volodymyr Zelenskyy. And some of the people behind it said their experience reflected similar efforts in Spain in the 1930s, when paintings were sent to Switzerland during the Spanish Civil war.

"We can draw a parallel between what happened in the Museo Nacional del Prado in the 1930s, and what we have done with the help of these Ukrainian museums who decided that the best option for their art works is to take them out of the country,” says Marta Ruiz del Árbol, a curator at the Thyssen-Bornemisza National Museum.

The paintings will remain on display until April next year.

Check out the video above for footage of the exhibition.