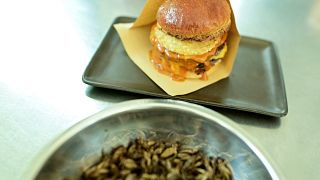 A plate of "Cricket-burger" and crickets at a restaurant in Bangkok   -   Copyright  MANAN VATSYAYANA/AFP or licensors
By Euronews  •  Updated: 09/10/2022

Insects may soon be incorporated into the diet of millions of people all around the world as the effects of climate change become increasingly apparent.

Crickets are popular in Thailand but for non-natives this can be a challenge.

Bangkok's Bounce Burger is determined to change that.

"We use cricket powder in our burgers to show everybody that the powder, as well as the actual crickets, can be produced into other menus other than street food," says 24 year old Poopipat Thiapairat, Owner of Bounce Burger Restaurant in Bangkok.

"Crickets don't have to be on street vendor stalls that are served only with soy sauce. They can be turned into burgers, bakery articles, soft cookies or even eaten with paprika seasoning as used to flavour French fries - these are all possible."

Crickets are a source of protein, as well as containing a host of beneficial vitamins, and are among the most commonly eaten insects by humans globally.

"The taste is good. The sauce blends over the smell of the crickets so I don’t feel like there are crickets in my burger", said Anut Sotthibandhu, a customer at Bounce Burger Restaurant.

Thailand already has thousands of insect farms. Many focus on animal feed needs, but some are now producing edible insects for humans.

On the outskirts of Bangkok, the Bricket R&D Cricket Farm supplies 160 kilograms of crickets every month direct to Bounce Burgers.

"In our R&D farm, we produce 40 kilograms (of crickets) a week so it’s 160 kilograms a month - it’s a R&D scale. And then all of them, we send to our restaurant, Bounce Burger, to be processed in many menus", says Thanaphum Muang-ieam, Managing Director of the Bricket R&D Cricket Farm.

Among the biggest appeals of cricket farming is that its environmental impact is far less than rearing cows or pigs.

Your taste preferences could be down to your genes, new study reveals