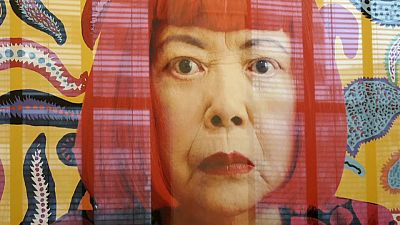 More than seven decades of her work is being celebrated, from her signature polka dots to infinity rooms.

Stephanie Rosenthal, curator of show and director of Martin Gropius Bau said, "We have almost 250 works in 19 rooms. It is really an exhibition that shows that she both wrote art history and that she is still today one of the most progressive artists."

Kusama became famous in Japan with her paintings before she moved to New York in 1956. She then became a leading figure in the pop art scene.

Some of her works have been reconstructed and others show videos from events she organised such as the "Polka Dot love rooms" - where she painted naked bodies.

The exhibition is on until 15 August.

For her pumpkins, peas, and peonies work, the New York Botanical Garden is exhibiting the 92-year old's art inside and outside - a year after it was scheduled because of the pandemic.

Called, "Kusama: Cosmic Nature" it highlights her early years growing up near fields of sunflowers, and pumpkins.

"There really hasn't been a show like this that has incorporated interior and exterior works, and a really broad view of her career based on the lens of flowers and plants and the natural world," explained Karen Daubmann, Vice-President for Exhibitions, New York Botanical Garden, Bronx.

Kusama's work has been influenced by bouts of hallucinations and mental illness. Since 1977, she's been living in a psychiatric hospital in Tokyo voluntarily and continues to paint daily. This exhibition will be on show until the end of October.

View history's most unusable objects in this virtual exhibition

Step inside masterpieces at this immersive art exhibition in Dubai