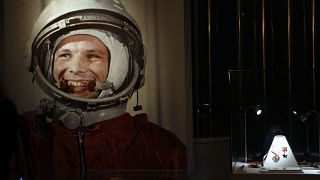 Sixty years after Soviet cosmonoaut, Yuri Gagarin became the first man in space, murals, statues and other public art clearly demonstrate how he became one of the country's most admired figures.

From the giant statue on Moscow's Leninsky Avenue to the famous 1969 mosaic by Soviet artist, Yuri Korolev, "The Cosmonaut" Gagarin's image represent a national hero.

But Gagarin's roots were humble.  He trained as a steel worker before becoming a military pilot and in Klushino in Smolensk, his family home is now a museum.

Tamara Filitova is the niece of Yuri Gagarin and is also the chief manager of Gagarin's memorial museums in Smolensk region.

"He loved people very much." She says.

"The town of Gagarin, over there was built thanks to him," says Anatoly Derbenkov, the family's neighbour.

"A cultural centre was built thanks to him. It wouldn't happen without him.  Without him it would be like some other villages which have already disappeared."

In the Memorial Museum of Cosmonauts, in Moscow, items from Gagarin's flight take pride of place.

Yuri Gagarin died aged just 34 in 1968 and the Soviet Union may be gone but his legacy lives on as a symbol of Russian success and for the Kremlin to inspire patriotic fervour.