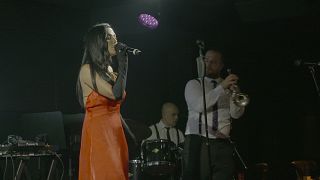 After a long break because of the COVID-19 pandemic, musicians in Dubai are getting back where they belong, which is performing live on stage.

Layla Kardan had been performing on Dubai stages for over a decade, but the health restrictions stopped her shows - and the entire Duibai entertainment industry - in its tracks.

As someone who thrives on constant live performance, Layla says it was very strange:

"It was really difficult not playing for six months, as a performer who was playing pretty much four or five times a week (before that).

"It was a big shock to the system. I feel like people have been starved of this kind of environment for so long that they come with an open heart and so ready to enjoy.

"We have so much fun when we perform and what I love is seeing people go on that journey with us. There's nothing like performing live. It's just, for me, the most beautiful thing."

Many musicians managed to see lockdown as an opportunity to explore new ways to create and share their music.

Khan, a Dubai musician who records and performs with Sounds Of Nomads, says this was the upside of the COVID experience:

"I think collaboration was one of the coolest things that happened during the lockdown with a lot of musicians. In my case, there was this singer Narya Null who reached out to me from Parma, Italy. She messaged me saying 'do you want to sing a song together?' She's an operatic singer. So that collaboration was super interesting."

Khan didn't stop there during a musically productive lockdown:

"Following that, I reached out to some of the guys in the music scene here in Dubai and everyone was positive about it. So you could tell that everyone was just waiting to make music again."

But it's not only the grassroots and local talent who recognise music as being vital to a city's vibrant culture. On a visit to Dubai earlier this year, musician, producer, songwriter and actor John Legend told Euronews that he believes a thriving local music scene is essential to any city:

"I think what defines a city is whether there's a vibrant market for musicians that live there and can work together and collaborate and perform together in the city.

"A lot of what makes and defines a city's music scene are the smaller venues and the local artists that are able to perform at those venues. I think that's what helps create a music scene.

"(Art is) the life of the city. A city can exist and it isn't a city that's enjoyable without the culture of the city.

"So art, music, dance, all of that education: all of these things come together to help define the culture of the city."

Smaller venues in Dubai are striking a chord with music lovers who've emerged from lockdown, although they're keeping social distancing in place.

Khan agrees that these venues play an important role:

"For me, it's the same high because I'm doing what I love. I'm putting my music out there. So if it's 20 people or if it's 2,000 people, for me, it's getting to do what I love at the end of the day, which is possible in a place like Dubai."

Layla feels the standards of the scene in the city are very high at any level and deserve all the exposure they can get:

"It's great to see a lot of musicians doing world-class music and putting it out on international platforms."

As Dubai musicians like Layla and Khan continue hitting the right notes, they insist that the show must go on.