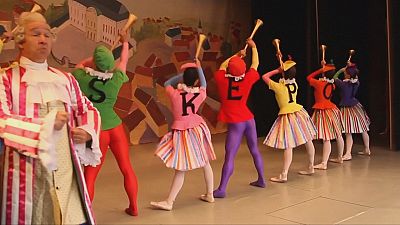 Denmark’s Queen Margrethe has taken on the role of a scenographer, designing the set for a new production of the classic fairytale Cinderella, at the Pantomime Theatre in Copenhagen.

“We’ve have had to adjust the costumes a little bit. Because I’ve never… I don’t know your choreography.” Margrethe said to Possokhov during a press conference. “I didn’t know how you do your choreography beforehand, so I had to, we had to adapt and I think it worked out”.

The Queen designed her first stage set for the Tivoli Pantomime Theatre in 2001. Since then she has designed a further four sets for Hans Christian Andersen stories and one for Tchaikovsky’s “The Nutcracker”.

Just a couple of days before the premiere, all the costumes got a final once-over for the royal seal of approval. “We have like a costume parade and we show her,” said dance Fenella Cook. “And everybody comes together and has a look – and make some small adjustments, we see how it fits and then works with the set. And also a lot of the movements we do, depends a lot on the fabric of the costumes, so somethings have to change, so no one gets hurt or caught and things like that”.