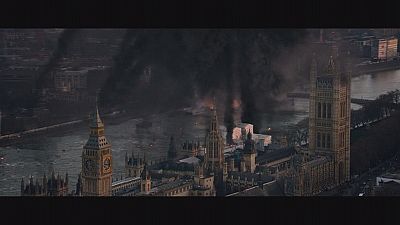 When the British Prime Minister dies under mysterious circumstances, his funeral in the capital is a must-attend event for leaders of the Western world.

What starts out as the most protected event on the planet, turns into a deadly plot to kill the world’s most powerful leaders. In short, all hell breaks loose.

London Has Fallen is a sequel to the 2013 thriller Olympus Has Fallen, which received mixed critical reception but earned more than $160m against a $70m production budget.

This time around the film was made for $105m and so the pressure is on for commercial success.

Gerard Butler, Angela Bassett and Morgan Freeman who were in the first project, turned out for the world premier in Los Angeles.

Scottish actor Butler returns to his role as a secret agent in the line of fire.

Speaking on the red carpet, Butler said: “Now we are in London and it’s an attack on a whole bunch of the world leaders. It just happens on a massive scale, it is not just the White House anymore.

“Then there is the escape because we make it through and then the rest of the movie is them hunting us down in every imaginable way.”

For the 57-year-old American actress Angela Bassett, who plays the no-nonsense director of secret service, filming was pressured but was more like a family reunion:

“You come back with Aaron and Gerard and Morgan and folks that you’re familiar with. There is a sure hand there, familiarity, in that you don’t have to get used to them.

“The character, the same thing, it was like putting on a cozy robe or shoes that you’ve broken in a little bit.”

The movie features different terrorists, but with the same target as in the 2013 hit the US president played by Aaron Eckhart.

On the back of the attacks in Paris and California, some critics have accused the film of feeding the frenzy of city-wide terrorist attacks but Butler defends this notion.

He explains that the movie was made before these events.

“We already made the film when all that happened,” Butler told Reuters, when asked about the events’ impact on the film.

“We wrote the film before ISIS was even formed. At the end of the day our film is purely fictional and purely entertainment and it focuses on us fighting back and winning.

“It’s about heroes and those that rise to that challenge. So we try to be sensitive to it and it affected our editing slightly. But, when we shot the movie none of that had happened yet.”

For the veteran actor Morgan Freeman, familiarity with the cast and crew made filming the sequel easy peasy.

“Pressure is a lot less because you know who you are working with and you know your own dynamics and all those things have been set. So, everything else is much easier when you go back.”

London Has Fallen is on general release from now.