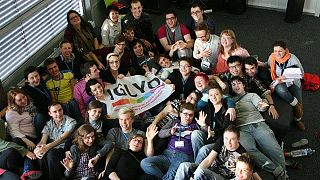 Surprisingly, being a young person in a wealthy but very competitive region such as Europe can often be stressful. Especially during the ongoing economic crisis, where the continent’s Generation Y has been the worst affected.

But while for the majority of youths choosing the right education or finding a job is hard enough, for others things are a bit more complicated. They have to deal not only with what they want out of life, but also with the fact that they are “different”.

Their “difference” is not a trend or something that they chose to do. It has to do with how their sexuality was defined since their birth and who they are as a person. Yet for the society they live in, what comes very natural to them is considered unacceptable, laughable or shameful and many think they must try to hide or suppress it.

For the young LGBT (Lesbian, Gay, Bisexual and Transsexual) Europeans, the first years towards adulthood can be the most confusing or traumatic. But in a modern society like Europe, it is disgraceful that people should still be forced to go against their very nature. And all this just to comply with the established, yet very misplaced, sense of morality and normality of the majority of the population. While much progress has been made in Europe towards the inclusion of LGBT people, obviously more needs to be done.

There are currently various organisations across the continent promoting equal rights and support for LGBT individuals. One of them is IGLYO (International Lesbian, Gay, Bisexual, Transgender, Queer Youth and Student Organisation), which was founded in 1984. It has over 80 member organisations working in over 40 countries in the Council of Europe and beyond, focusing on LGBT youths.

Patrick Dempsey, the co-chair of IGLYO, describes how in EU educational institutions, almost 30 percent of LGBT people often experience negative comments or conduct because of their sexuality.

In the Fundamental Rights Agenda LGBT survey of 93,000 people, under 24’s were the least likely to be open about being LGBT and the most likely to state that they had been victims of violence, or discrimination in the year before the survey.

“This discrimination and violence can take place in a variety of environments, but one of the most likely settings is the school or university,” explains Patrick. “Often due to discrimination and fear, the majority of LGBT people stay in the closet until they finish schooling,” he continues.

It is evident that homophobic and transphobic bullying occurs at a particularly vulnerable time for young LGBT people. “The average age to realise LGB identity is 12, and for transgender individuals this can be far earlier, but the average age to come out is 18-21,” Patrick explains.

For example in Ireland alone 27 percent of LGBT young people self-harm, with the most likely age to do so being 17. A variety of issues including discrimination, bullying, mental health issues, social exclusion and violence contribute to this phenomenon and they are often interlinked.

But there are also longer term impacts on LGBT youths from bullying in schools. According to IGLYO’s research on homophobic and transphobic bullying and its impact on education and employment, 27 percent of people felt their confidence was affected when looking for a job.

And if this was not enough, LGBT youths have to also “come out” to friends and family. “It will always be a big issue, a constant thing that they have to do, because our society presumes that we are all “straight” and cisgendered (comfortable with the gender assigned to us at birth)”, Patrick says.

LGBT people can often be left in the stressful and awkward situation of wondering how people will react, or if they feel safe enough to disclose sexual orientation or gender identity. “The important thing for families of LGBT youths is to remember, that it is the same child they loved prior to them coming out,” Patrick adds.

Patrick thinks that education is the key to tackling homophobic and transphobic bullying. “A lot of prejudice actually comes from ignorance or lack of informed opinion,” he describes. Aspects of homophobia and transphobia are passed down from one generation to another.

“Education can stop that, and ensure that individuals are informed about LGBT people and making informed opinions about issues that affect them, like marriage equality or gender recognition,” Patrick says.

“Even in schools and universities, getting to know an LGBT person can completely change perceptions of what being LGBT is,” he continues.

Boys can be bullied for being gay simply because they like dancing, even if they aren’t gay. Girls can be accused of being a lesbian because they prefer mechanics over cooking. Those who don’t fit into either ‘boy’ or ‘girl’ binary genders, face severe discrimination and intimidation. “Simply put, homophobic and transphobic bullying doesn’t just affect LGBT people, it can affect anyone,” Patrick states.

But LGBT youths do not face the same challenges across Europe. There is a gradual divide between the West and East of the continent, when it comes to the overall legal situation for LGBT people.

“I think the promotion of fundamental rights and freedoms should play a key role in the European Union. The EU is not just a union of economy, industry or trade; it’s a union between people,” Patrick says.

He believes that for the EU to become truly a union, all of the individuals within it must be equal. This includes all minorities, and naturally, LGBT people. Individual member states have the direct responsibility to ensure citizens’ rights, but the EU should have a say in safeguarding and promoting them throughout the union, according to Patrick.

Ultimately just like all young people, LGBT youths want their voices heard, understood and respected. “They want to walk on their streets in safety, their school corridors without intimidation, and to participate in the life of their communities, countries and indeed this European Union,” Patrick concludes.

Equal participation and active citizenship should not be promoted solely towards “straight” youths. Young LGBT individuals – when empowered – can also go on to do amazing things, just like all other young people.

When European states show disrespect towards LGBT individuals by disregarding their human rights, they actually incapacitate a very dynamic portion of their population. LGBT people are among the most creative and pioneering citizens in every society.

In addition we have to remind ourselves that LGBT people are not just tax payers, voters, employees, civil servants or entertainers, they are also somebody’s son or daughter.

It is in all European countries’ interests to have a fully integrated LGBT community in their society, with their rights safeguarded by European law. And the best way to achieve this is to start supporting them early, during the most vulnerable period of their lives: their youth.