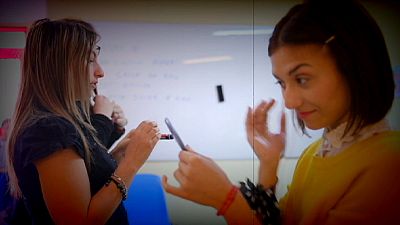 Cinema is said to be a door to new worlds, but it can also be a valuable resource to help tackle illiteracy. To find out how Generation Y visited an adult education scheme in the French resort of Nice.

At the training centre for young adults the focus is on creativity through theatre and music. The participants aim to enhance or refresh basic skills. Alisson De La Rue wants to become a nursing assistant and is trying to make up for time wasted in school.

“The problem was I messed around a lot, I didn’t listen to the teacher. So in high school I had big gaps in my knowledge,” she says.

“There are big gaps in my maths and English. Here, at this centre, I have the opportunity to expand my knowledge.”

Another participant, José, came from Portugal less than a year ago, so learning French is his priority. His schooling was also a bit sketchy.

“The problem was being late in the morning. You know… that laziness when you have to get out of bed. I also had football training, so it was hard to get up in the morning,” he says.

Separately, a group of 16 teachers from nine European countries came to Nice to learn new skills as adult educators.

The workshop is an initiative of the Erasmus Plus programme. It uses teaching exercises based on films. In one exercise the raw material was movies that featured in Nice’s Short Film Festival.

“What we’ve been doing is what we call a ‘programming workshop,’ says workshop coordinator Nicolas Deliau. “We show films, discuss which film we can show or not show, what’s interesting about a film, how to make people participate, how to move from a passive viewing of the film to a more engaged one.That engagement is very important.”

Teacher David Yáñez Barroso says the course gives a new perspective on pedagogic techniques: “The best thing about having film as a learning tool is that it’s more or less a universal language. Everyone can understand a film. You can make two people, with totally different education backgrounds, nationalities or mother tongues, understand the same concept.”

The participants create word clouds to express the film in captions. Another exercise aims to combat functional illiteracy, using subtitling as a resource to learn or enhance a given language.

Wojciech Raszewski admits it was quite a challenge: “It’s really difficult. You have to stop at the begining of the dialogue and, of course, try to understand what they are talking about, write it down, connect it. They told us that for one minute of movie, you have to spend one hour.”

His views are echoed by fellow teacher Anthea Scerri: “This is something new to me. I never personally used short films in order to enhance the teaching of adults. So this is a new tool which I’m very eager to continue learning.”

“It’s a common language that’s also entertaining, says
David Yáñez Barroso. “It’s very important when you are working with students who can have low motivation levels or problems in their school path.”