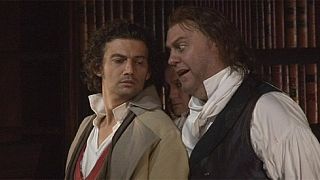 One of the most memorable arias in the history of opera passionately sung by Angela Gheorghiu is Puccini’s Tosca in the recent Royal Opera – Covent Garden production in London.

In this star-studded cast, two more internationally acclaimed singers: Welsh bass-baritone Bryn Terfel as Baron Scarpia, and German tenor Jonas Kaufmann, impersonating Mario Cavaradossi, the artist, the Voltairian intellectual; he risks his life to save his friend Angelotti. He will be arrested, tortured and sentenced to death by sadistic Scarpia, whose perverse deceit Cavaradossi hides from Tosca.

Jonas Kaufmann explained: “He knows that it has been a setup and the only reason why he doesn’t show that obviously it is because he is absolutely sure that she is going to totally freak out and therefore he just lets her believe that they are going to escape and everything will be fine.

“It is this double plane which makes it very interesting to show the audience that he is facing the death penalty and that at the same time he is planning the future with her.

“He is so much in love with her, no matter what she does, it’s something new every other minute: ‘where have you been?’, ‘you should never do that’ – and he loves her for that.

“I remember a relationship that I had many years ago, it was so passionate… we were both very strong characters… it was fighting and loving all the time,” he told euronews.

Cruel Scarpia is the anti-hero, and the forte of many a generation of baritones.

He is played by Bryn Terfel: “Everybody wants to sing the role of Scarpia: it is tinged with danger, but also excitement. Of course he is evil, misfit, malcontent, he is like a vulture looking from high and ready to pounce. He is not only a police officer but also an aristocrat, he is a baron, and therefore everything within his persona, his movements, his gesture, are very minimal and yet rather evil.

“Within the opera in itself it is a crescendo of the way that he insinuates, the way that he talks to Tosca, which brings out this terrific anger and jealousy in Tosca, and she falls so incredibly into his sadistic plan.”

In this story you can hear segments of Act II from Tosca, by Giacomo Puccini.