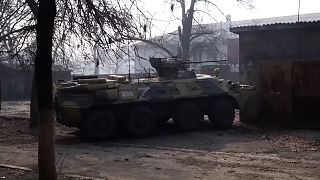 According to state media, fighting continues as Russian and Ukrainian soldiers vie for control of the besieged city.

The video shows military vehicles with the letter "Z" painted on them. The letters "Z" and "V" are used on Russian armoured vehicles in Ukraine.

Around 100,000 civilians are believed to be trapped in Mariupol, which remains cut off from supply lines, with little or no food, water, fuel and medicine.