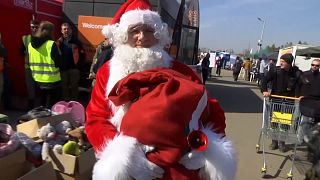 As thousands of people continued to cross from Ukraine into Poland, a special guest was on hand to welcome youngsters into the country. At the Medyka border crossing children were greeted by Santa Claus, who gave out gifts to young people who had been forced to leave their homes due to the fighting.

The man behind the idea, Chris Gural, said he wanted to give the youngsters something to smile about and to distract them from the thoughts of the war. "I want to give them five or ten minutes, maybe 30 minutes, to smile and think about the toys," he said. "Not about the war."

More than 2 million people have arrived in Poland from Ukraine since the beginning of the conflict.

A historic wooden bridge over the river Tisza, located in Sighetu Marmatiei, northern Romania, was turned into a “toys’ bridge” after the local border police, workers and other locals brought toys for Ukrainian child refugees.

The border point in Sighetu Marmatiei connects the Ukrainian city of Solotvino and it is one of the three border points through which Ukrainian refugees can enter Romania. The other two are in Siret (northeastern Romania) and Isaccea (eastern Romania). Since Russia invaded Ukraine, on 24 February, over 1.5 million Ukrainian children have fled the country, which is about 55 every minute, according to UNICEF. “Ordinary people, border guards and volunteers placed these toys on the edges of the bridge, so that when entering Romania, children coming from Ukraine can take a plush toy,” the Sighetu Marmatiei Border Police wrote in a Facebook post.