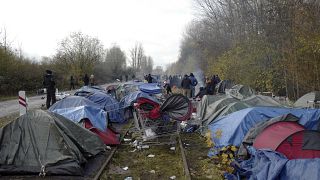 At makeshift camps between Dunkirk and Calais on France's northern coast migrants are digging in, waiting for their chance to make a dash across the English Channel, despite the deaths of at least 27 people this week when their boat sank trying to make the journey.

Police have stepped up patrols in recent days and the weather has worsened, making this a bad time to attempt a crossing.

But most migrants say the tragedy will not prevent them from climbing into a flimsy inflatable boat packed with up to 50 people in hopes of reaching Britain.

"I don't afraid of anything," a 22-year-old from Iran, who identified himself only as Kawa. "Water? If we die… sorry to say this but we already died. Nobody accepts us anywhere. We're... useless," he added.

Now they want to reach England, and eventually Canada.

Fifteen miles (25 kilometres) to the west, at a camp outside Calais, migrants from Sudan kick a ball around a patch of bare ground and hang laundry on a fence in hopes it will dry in the weak sunshine.

He says he has tried to smuggle himself onto a vehicle heading for Britain everyday for the past six months.

Now he is ready to try the boats, if he can find the money.

"I want to go England for anything. Dangerous, no dangerous, I'm going to England. I believe that dream," he says.