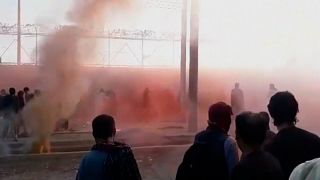 Large crowds remained around Kabul Airport on Thursday, even as tear gas and fire hoses were used to try and disperse them ahead of the looming Aug. 31 deadline for the U.S. to withdraw troops.

Several countries urged people to avoid the airport, but with just days left before the evacuation effort ends and American troops withdraw, few appeared to heed the call.

The Taliban has promised to return Afghanistan to security and pledged they won't seek revenge on those who opposed them or roll back progress on human rights. But many Afghans are skeptical.

Outside New Kabul Bank in the capital hundreds lined up to withdraw their money as the price of essentials surge.