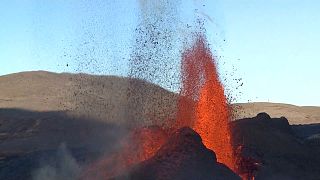 The Geldingadalir/Meradalir volcanic eruption on Iceland’s Reykjanes peninsula this weekend abruptly became volatile after remarkable stability since it began on 19 March.

Cycling between almost completely stopping, and then throwing lava up to 300 metres into the air—which is clearly visible in Reykjavik—scientists say the eruption is now acting more as predicted from the beginning.