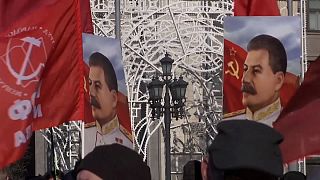 Russian communists on Friday remembered former leader Joseph Stalin as they marked the 68th anniversary of his death.

Gennady Zyuganov, the head of the Russian Communist Party, hailed both Stalin and Vladimir Lenin, saying following the paths of both former leaders would lead to unity and progress in the country.

"Stalin is a creator," Rashkin said. "If our country continued along the road of Stalin, (to maintain) his course, we would be the first among the first in the whole world."

The Communist Party is currently the second biggest political party in the Russian Federation, after President Vladimir Putin's United Russia.