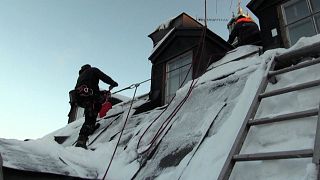 Stockholm's rooftop "sweepers" have been kept busy with snowfall since the beginning of the new year.

The roofers brave dizzying heights to clear the city's rooftops of piled-up snow and dangling ice.

"In the beginning it was like scary all the work and not just the snow one, working on the roof was scary but after a while you get used to it, it is like usual work, you don't think so much about that," Andrei Plian, a roofer, told AFP.

Equipped with ropes and shovels, the sweepers blow a whistle to alert people below so they don't get hurt.

Sometimes, Plian says, they have to yell at the people below.

"My job is to make sure that no one passes and blow the whistle to them so if someone passes they don't get ice or snow on them. I'm just here so people don't get hurt."