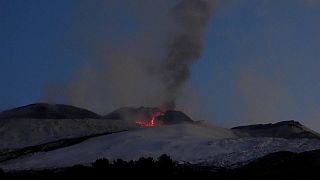 According to the Italian news agency ANSA, a series of explosions have occurred in three different craters in the volcano over the past two days.

The explosions did not create any risk to the area and did provide a spectacular show.

Etna is the largest of Italy's three active volcanoes which also include Stromboli, on the Sicilian island of the same name, and Mt Vesuvius near Naples.

Etna is a popular tourist destination attracting hikers eager to see the extraordinary lava flows glowing orange in the night.