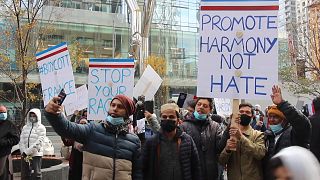 Members of Toronto's Muslim community gathered in front of the French consulate building to offer flowers to pedestrians.

It came after several attacks in Paris and Nice over the past several weeks.

After his online meeting with the leaders of the European Union, Canadian Prime Minister Justin Trudeau condemned the attacks, which he described as "heinous" terrorist acts, and expressed his condolences to the families of those who lost their lives.

"They were heinous, criminal acts, unjustifiable by any circumstance and an affront to all of our values," Trudeau said on Thursday at a news conference.

The comments came shortly the knife attack at the Notre Dame Church in Nice, France where three people were killed.