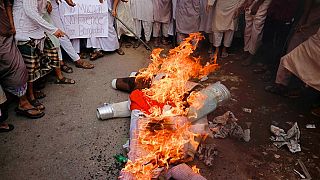 Protesters in Bangladesh burned an effigy of Emmanuel Macron as the French president’s vow to protect the right to caricature the Prophet Muhammad continues to roil the Muslim world.

The protests in the capital Dhaka come amid rising tensions between France and Muslim-majority nations, which flared up earlier this month when a young Muslim beheaded a French schoolteacher who had shown caricatures of the Prophet Muhammad in class.

After Samuel Paty's brutal killing, Macron defended freedom of expression: "We will not give up caricatures and drawings, even if others back away", calling for an end to hatred and violence and for respect for others.

A series of attacks that French authorities have attributed to Muslim extremism ensued.

Over the past week, protests and calls to boycott French products have spread rapidly from Bangladesh to Pakistan to Kuwait. Social media has been pulsing with anti-France hashtags.