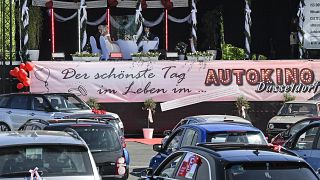 Three couples were married at a drive-in cinema in the German city of Duesseldorf, Germany, on May 5th, as their guests looked on from inside their cars.

Germany is currently in the process of loosening restrictions imposed in March to slow the initial coronavirus outbreak, though social distancing measures are still strictly adhered to.

The first wedding of the day was between supporters of the local football club, Fortuna Duesseldorf, Janine Miodunski and Philip Scholz who said 'I do' to each other on a stage decorated with flowers.

Relatives and friends watched the short ceremony from their cars parked in front of the stage, honking their horns as Duesseldorf Mayor Thomas Geisel - separated from the couple by a plastic window - pronounced them man and wife.

After the ceremony, the couple, wearing facemask with the Fortuna Duesseldorf club logo, said the ceremony's restrictions now felt like the 'new normal'.

"There's no other way at the moment and we made the best out of it today," the bride said, laughing.

The head of the country's disease control centre said there would be a second wave of coronavirus infections, but that the nation was well-prepared to deal with it.