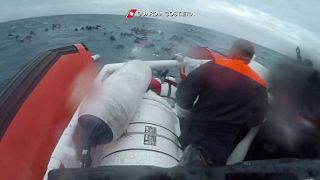 A coast guard diver pulled a girl from the water after she was seen floating in the sea with her father off the Italian coast.

After the girl was safely pulled aboard a nearby patrol boat, the girl's father and mother joined her on the vessel.

Others were not so lucky: the bodies of five women were recovered early on Sunday after the shipwreck.

Three bodies were recovered at sea, while two others were found on a beach, said the Italian coastguard.

But the survivors warned that up to 20 people has not been counted, adding that those missing at sea were from Algeria, Tunisia and Pakistan.