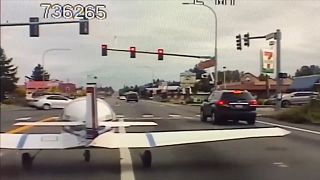 Authorities say a small plane landed on a busy stretch of road south of Tacoma, Washington, stunning motorists but causing no damage or injuries.

Washington State Trooper Clint Thompson was driving along Pacific Avenue South, also known as State Route 7, just south of Seattle and west of Tacoma when he saw a KR2 single-propeller plane descending closer and closer to the roadway.

He realised it was actually going to land on the roadway, and turned on his emergency lights to block traffic to help the plane land.

The dashcam in Thompson's patrol car captured the plane hitting the improvised runway and thundering down the road to come to stop at a red light, just like the cars on the road.

The video shows the pilot, David Acklam, jumping out of the plane and pulling it off to the side of the road with the state trooper's help.