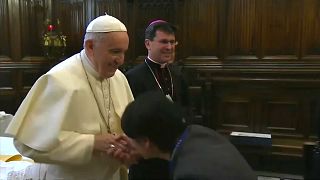 Pope Francis doesn't want anyone to kiss his papal ring

On Monday, (March 25) Pope Francis visited a Catholic shrine in Loreto, he repeatedly withdrew his right hand as a long line of people bowed and tried to kiss the ring on it.

The footage went viral and the pope's refusal quickly entered what is known as the Catholic culture wars between conservatives and progressives.

LifeSiteNews, a conservative Catholic website that often criticizes the pope, called the episode "disturbing" in the headline of a long article that included a long history of papal rings and their significance.

Some Vatican watchers noted that even former Pope Benedict, a hero to nostalgic conservatives, and his predecessor John Paul, did not like having their hands or rings kissed - at least not by long lines of people for the sake of expediency.