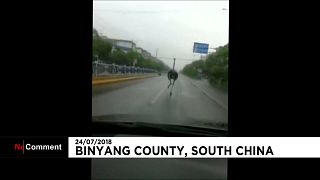 An ostrich, who escaped from its home on a farm, was found running down the city streets in south China's Guangxi Zhuang Autonomous Region on Tuesday.

Several local residents recorded videos showing the ostrich running down the streets of Binyang Country, after the bird made its escape from a local village.

The bird, which was determined to outrun its owner, did not adhere to local traffic regulations, switching lanes without signalling, running through red lights, and exceeding posted speeds.