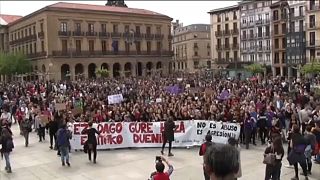 Demonstrators gathered in the streets of Pamplona, Spain, on Saturday to protest a ruling which saw five men cleared of gang-raping a teenager at San Fermin bull-running festival two years ago.

According to local police, around 35,000 people marched outside Pamplona's court, where the 'Wolf Pack' trial took place, chanting "we want justice" and waving signs that read "No means no" and "It is rape, not sexual abuse."

The men, who recorded the attack on their mobile phones and laughed about the incident afterwards on a Whatsapp group, were not convicted of rape, but the lesser crime of sexual abuse, and sentenced to nine years in jail.

Shaken by the scale of protests that followed the court ruling, the Spanish government said on Friday it would consider revamping the country's criminal code to ensure that sex crimes were punished more harshly.