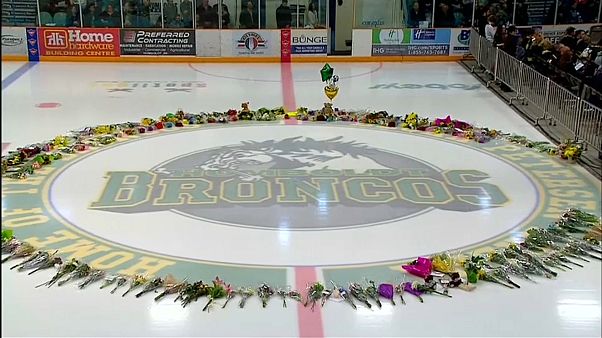 A hockey arena became the epicenter of grief for a small Canadian town on Sunday, as friends, relatives and those that housed the young hockey players gathered to mourn 15 people killed after a semi-trailer slammed into a bus carrying a youth hockey team in western Canada.

Fourteen were also injured, some critically, in a collision that left a country, its national sport and the hockey-obsessed town of Humboldt, Saskatchewan reeling.

The bus had 29 passengers, including the driver, when it crashed at about 5 pm on Friday on Highway 35, police said. Among the dead are Broncos head coach Darcy Haugan, team captain Logan Schatz and radio announcer Tyler Bieber.

Residents of this town of less than 6,000 have been leaving flowers, team jerseys and personal tributes on the steps of the arena's entrance, forming a makeshift memorial.