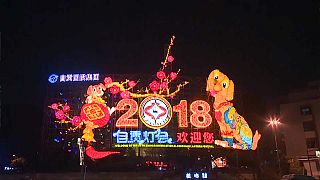 Some cities in China are holding lantern shows amid the approach of the Spring Festival, which falls on 16, February this year.

Over 130 groups of colorful lights featuring Chinese cultural elements lit up the night in Zigong City of southwest China's Sichuan Province Friday as the city launched its 24th lantern show.

The green concept is highlighted at this year's event, with one mountain scenery-themed lantern group being made of over three million recycled glass bottles, all tied up manually.

The light show will last until mid-March.

More than 200 groups of lamps with energy-saving light sources illuminated the ancient town when it opened on Thursday.

The art festival will last until mid-May.