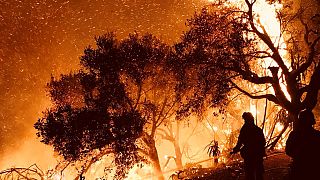 As new fires keep raging across Southern California, firefighters are racing to put out the flames.

State officials have ordered new evacuations across coastal communities in Santa Barbara County, as intense blazes continue to rise from the hills near Los Angeles.

In the small oceanside city of Carpinteria, another fire broke out overnight when embers flew into the air, landed on the hillside, and started new pop-up fires. Homes in the city, located east of Santa Barbara, are now at risk.

Emerging from thick walls of smoke, helicopters could be seen dropping water onto the flames.

Michael Gallagher is one of about 4,000 firefighters on duty to battle the blaze.

"We've been up, I'm at 29 hours straight, every other day. Everyone on this division is at 28, 29 hours, so we are exhausted, but we aren't coming off until this is done," Gallagher said.