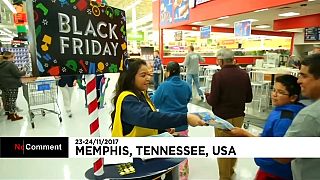 Even before Black Friday had dawned, US shoppers had already begun splurging – spending some one and a half billion dollars by Thanksgiving evening.

Retailers opened their doors early, hoping to lure bargain hunters away from the turkey and into their stores. After two disappointing years, this year’s holiday season is off to a promising start, with a strong labour market, rising home prices and record high stock markets boosting consumer confidence. According to Adobe Analytics, which tracked 80 percent of online transactions at the top 100 U.S. retailers, consumer spending was up by almost 17% year-over-year. Strong crowds were also reported at stores across the country.

Holiday spending in November and December can account for as much as 40 percent of annual sales for many retailers and they do their best to tempt shoppers with deals and discounts. Average discounts this year ranged between 10 and 16 percent, with the best deals offered on computers, sporting goods, clothing and video games online on Thanksgiving evening.