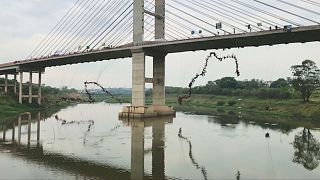 Dramatic pictures from Brazil show the impressive ripple effect as 245 people tied to ropes jumped off a 30-metre bridge at the same time.

The world record attempt took place in Hortolandia, about one hour from Sao Paulo, on Sunday (October 22).

The jumpers, wearing white helmets, fell almost simultaneously and swung back and forth. Organisers said a total of 20 kilometres of rope and 1,000 harnesses were used.

By Monday Guinness World Records had not yet issued an official statement confirming the record attempt, but it surpassed another in the country with 149 participants in April, 2016.