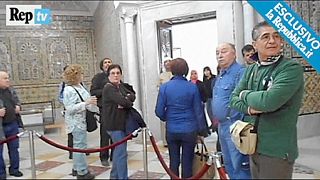 It reveals the panic after gunfire was heard during Marcello and Maria Rita Salvatori’s tour of the museum.

The video emerged on Tuesday (March 24) as staff began returning to the museum for the first time. It is expected to re-open to the public at the weekend.