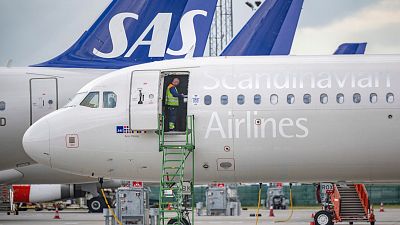 The Scandinavian airline, SAS, announced that it has gone bankrupt a day after 1,000 pilots walked out on strike.

On Tuesday, the airline voluntarily filed for ‘Chapter 11 bankruptcy proceedings’ in the United States as part of a restructuring plan.

The move will allow the carrier to continue operating, despite facing financial problems.

In the US, Chapter 11 is a mechanism allowing a company to restructure its debts under court supervision. SAS said its "operations and flight schedule are unaffected by the Chapter 11 filing, and SAS will continue to serve its customers as normal.”

However, it acknowledged that the strike launched on Monday by Scandinavian pilot unions would continue to impact operations.

"The ongoing strike has made an already challenging situation even tougher. The Chapter 11 process gives us legal tools to accelerate our transformation, while being able to continue to operate the business as usual," chief executive Anko van der Werff said in a statement.

Pilots walked out on Monday after negotiations between the unions and the company broke down.

The strike is estimated to lead to the cancellation of approximately 50% of all SAS flights, impacting around 30,000 passengers a day.

The pilots are protesting against salary cuts demanded by management as part of a restructuring plan aimed at ensuring the survival of the company, which has suffered a string of losses since the start of the coronavirus pandemic in early 2020.

On Monday, SAS said that the strike "is estimated to lead to the cancellation of approximately 50 per cent of all scheduled SAS flights," impacting around 30,000 passengers a day.

Which countries have a stake in SAS?

SAS management announced a savings plan in February, dubbed "SAS Forward", which was supplemented in June by a plan to increase capital by nearly €1 billion. Denmark and Sweden are the biggest shareholders with 21.8 per cent each.

Denmark has said it is ready to increase its stake to 30 per cent. Sweden has refused to provide fresh funds, but is willing to turn debt into capital.

Norway, which left SAS in 2018, stated that it is ready to return to the airline, but only by converting debt into equity.

The strike at SAS comes as the summer is shaping up to be difficult for European airlines and airports, faced with staff shortages and causing queues, disruption and delays.

After widespread job losses linked to COVID-19, airlines and airports are struggling to recruit new staff in many countries.