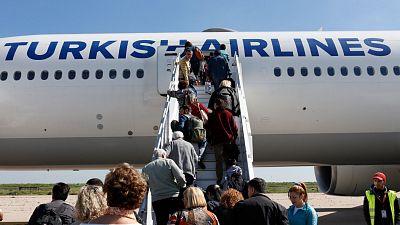 The move is part of the country’s push to be internationally known as “Türkiye”, which is how its name is spelled and pronounced in Turkish. The name is pronounced tur-key-yay.

“Turkey no longer exists. It is Türkiye,” Erdogan said during a ceremony marking the launch of a new communications satellite.

“Türkiye Hava Yolları will be inscribed on the bodies of our planes instead of Turkish Airlines.”

Why has Türkiye  changed its name?

Erdogan’s government said the name “Türkiye” better represents Turkish culture and values - although some observers have suggested that the move is an effort to dissociate the country from from the bird, turkey.

In a December statement, the Turkish government said the rebrand was to "preserve and glorify the culture and values of our nation."

The country called itself Türkiye in 1923, following its declaration of independence. In December 2021, Erdogan mandated that the phrase 'Made in Türkiye' be displayed on Turkish exports.

The tourism sector has been at the forefront of the rebrand. Earlier this year, the Turkish government released a promotional video depicting tourists from across the world saying “Hello Türkiye” at famous destinations.

Slowly but surely, international observers have made the switch too.

The U.N. and NATO formally began using “Türkiye” instead of “Turkey” this year.

NATO Secretary General Jens Stoltenberg referred to the country as “Türkiye” during visits to Helsinki and Stockholm this week, as did Finnish President Sauli Niinisto and Swedish Prime Minister Magdalena Andersson.

The two countries are trying to overcome a Turkish objection to their bid to join the military alliance.

As a NATO ally, Ankara has the power to block their membership bids. The country accuses the two Nordic nations of backing Kurdish militant groups.