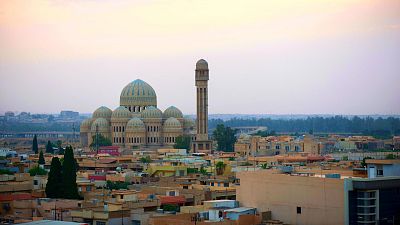 Mosul is most commonly known as a battleground, not a tourist destination.

The city was famously captured by Islamic State fighters in June 2014, teeing up years of conflict between militants and the Iraqi Armed Forces.

But after it was finally liberated in July 2017, locals set about reshaping the public image of this much-maligned city.

Now even tourists are coming to stay.

"I was sure I would find a very pure country, not ruined by mass tourism,” says Yvette Carnell, a first-time visitor from Portugal.

“I always wanted to see what had happened here and to better understand it. It’s very moving to come to Mosul and see how people are dealing with it, how they are getting back to life."

An ancient city beset by war

These visitors were some of the first to participate in the free guided tours - a new initiative aimed at drawing tourists to Iraq’s second largest city.

The excursions are run by volunteers who speak English as their second language. As well as the free tours, the group offers transportation and traditional meals in local restaurants.

"What we're working on now is marketing tourism in the city to attract many tourists, whether from inside Iraq or foreign tourists from abroad,” says Ayoub Dhanoun, head of Mosul Heritage, the group behind the tours.

“We started working for free to promote the city to show that it is safe and able to receive tourists."

During their time in the city, visitors are introduced to the unique architecture of the town centre. Complete with bustling marketplaces and 12th-century buildings, the scars of war are starting to heal in this historic part of the Middle East.

Non-governmental organisations like UNESCO have invested large sums of money in the city’s Old Town, offering hope that one day, Mosul can return to its former glory.

"The idea that comes to Portugal is just about war and nothing else,” says Rui Barbosa Batista, a tourist visiting Iraq.

It's safe to travel here, people are nice, the Middle East is not a bunch of terrorists.

“Coming here, the idea is to help to deconstruct this kind of idea. It's to show people is that it's safe to travel here, people are nice, the Middle East is not a bunch of terrorists. It’s full of normal people like everywhere else in the world, with the same dreams and the same desires."

As part of a wider effort to promote tourism in the country, Iraq has now removed the pre-arrival visa requirement for citizens from 37 countries, including the US, UK and EU countries.

Watch the video above to find out more about visiting Mosul.