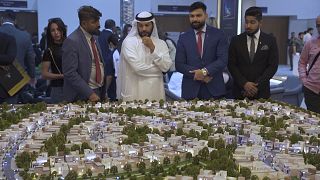 Property developers from around the world gathered at the Dubai World Trade Centre for the 24th edition of Cityscape Dubai, to showcase their latest and upcoming developments.

This year, the event focused on how the real estate market is adapting to change when it comes to new technology and sustainability.

During the three-day event, thousands of investors and real estate professionals gathered to network, create joint venture partnerships and discuss the future of real estate.

A whole host of new-to-market projects from top developers were on display, including luxury local player Sobha Realty, with a focus on urban communities. The group announced two projects: Sobha 1 and Hartland 2, which are worth €6.23 billion and will be completed in five to eight years.

“It's big news for Shoba", Francis Alfred, Managing Director, and CEO at Sobha Realty told Euronews. "Heartland is eight million square feet of land, [with] up to 7000 homes and 100 luxury villas… 50% of the land is open space. Sobha 1 is approximately 35 acres with around 2600 homes”.

“The Dubai real estate market has been picking up very well. The golden visas, investor-friendly opportunities to open your own companies, and the weekend changing from Friday to Sunday. A lot of this has brought a lot of traction to Dubai”, he explained.

International developers at the exhibition included those from Bali, the UK, Jordan, Germany, and Turkey. The event comes as Dubai’s property market continues its investor appeal amid higher oil prices.

“Dubai’s property market is in an absolute boom", said Alexander Edwards, the Exhibition Director of Cityscape Portfolio, at Informa Markets.

"The Dubai Land Department announced there had been AED2 billion (€525 million) worth of real estate transactions in one day, which is absolutely incredible. I think everyone is looking to Dubai for safety, great investment opportunities and putting their money somewhere safe”.

Alexander Edwards also revealed there had been some spectacular launches at Cityscape this year with new partners.

“We've just signed an MOU with the Dubai Land Department to launch Cityscape Wire, which is Women in Real Estate, which we're extremely excited about”, he said.

As well as oil prices, forward thinking government policies, new visa rules and an increase in population are boosting on and off-plan property sales in the Emirate. A rise in high net worth individuals in the first six months of the year means Dubai is also becoming more of an investment source market.

Meanwhile, Dubai-based property developer Azizi Developments announced it will be delivering around 100 ongoing projects next year, while more than 10,000 projects worth several billion euros are in the planning stage, and projected to be delivered between 2023 and 2028.

“One of them is the second tallest building in the UAE, the fifth or sixth tallest on earth… the second tallest after the Burj Khalifa. It takes a whole different level of engineering to make that happen”, Farhad Azizi, CEO of Azizi Developments told Euronews.

Elsewhere, an app turning speech into subtitles on smart glasses as well as translating conversations into nine different languages has officially launched worldwide. The XRAI Glass App allows conversations to be subtitled in an instant.

The software allows deaf people and those hard of hearing to 'see' conversations on AR glasses.

The XRAI Glass App, when used with Nreal Air Augmented Reality smart glasses uses AI to subtitle, translate and act as a personal assistant for the eyes.

“We piloted this software back in August, and we've had dozens and dozens of people around the whole world testing this out”, said Dan Scarfe, CEO of XRAI.

The revolutionary technology is set to help millions of people who need to remember details. Business meeting attendees will receive a summary of their meetings in an instant and in different languages, helping bridge international communication and boost global reach.