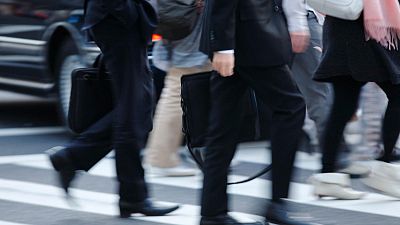 Thousands of UK workers will get an extra day to relax during the biggest ever four-day working week trial   -   Copyright  Canva
By Luke Hurst  •  Updated: 06/06/2022

The four-day week seems like it has been coming any day now for years. But for some 3,300 employees in the UK, it's now a reality.

Some 70 UK companies and organisations have signed up for the biggest ever four-day week trial, which starts on Monday and runs for six months until January 2023.

The trial is being organised by 4 Day Week Global, along with the think tank Autonomy, the 4 Day Week Campaign, and researchers at Cambridge University, Oxford University and Boston College who will be collecting and analysing the results.

The researchers will work with each organisation to measure the impact of the reduced hours on productivity, and the well-being of its workers, as well as the impact on the environment and gender equality.

Those taking part will work one day less a week while receiving the same pay.

"By moving first we get a lot of advantages,” said Paddy Lambros, head of people and talent at tech company Sensat, which has started the trial already.

"When we tie all those things together we see a massive advantage in adopting what we think is coming inevitably anyway, earlier than everyone else".

Before the COVID-19 pandemic, Sensat staff were in the office five days a week, and they didn’t hire remote workers.

Sensat will be seeing how the trial goes before deciding whether to continue with the four-day week - and they anticipate some potential issues.

Lambros said the company had to work a little harder to maintain social relationships between co-workers as a result of going remote, and the four-day week is exacerbating that.

“We’ve not seen a drop in productivity. But some of the things that can be sacrificed are opportunities for the team to talk more socially. We have to be more proactive in ensuring people are spending enough time together to build strong productive relationships”.

'What else should we be challenging?'

Those involved in organising this pilot point to the sudden and necessary changes to working patterns and expectations caused by the coronavirus pandemic.

"If we don’t need to be in the office and can be just as productive at home, what else should we be challenging about our traditional ways of working?" Jennifer Lecomber-Peace, HR Manager at Adzooma, told Euronews  Next.

"And who’s to say you can’t be as productive in four days as you are in five?"

She is “quietly confident” the four-day week trial will work at her company, which, like Sensat, was office-based pre-pandemic.

"There’s so much research about how work expands to fill the time. Anyone who is sceptical about the four-day week should go and look at the studies in Iceland and Japan to see the positive impact it can have".

Her company offered the four-day week on an optional basis. Unsurprisingly, there was a universal sign-up.

Other organisations taking part include the Royal Society of Biology, a brewing company called Pressure Drop, and a fish and chip shop.

The previous largest study of this kind took place in Reykjavík, the capital of Iceland. More than 2,500 workers were involved in that trial.

It was hailed as an "overwhelming success," with workers reporting being less stressed, reduced risk of burnout, and there were no negative effects on productivity or services.

Conducted in 2015 and 2016, the trials led to material changes in the country.

Last year, 86 per cent of workers in Iceland were either working shorter weeks or had contracts that would enable them to reduce their hours.

At the time, Will Stronge, Director of Research at Autonomy said: "This study shows that the world’s largest-ever trial of a shorter working week in the public sector was by all measures an overwhelming success".

"Workers have emerged from the pandemic with different expectations around what constitutes a healthy life-work balance," said Joe O’Connor, CEO of 4 Day Week Global.

"Sometimes it takes a big disruptor to dislodge deeply embedded societal and cultural norms. That's what we are seeing with the traditional five-day working week following the COVID-induced flexible working revolution".

"Those who think we will turn the clock back to the way things were two years ago are engaged in 'pie in the sky' thinking - the four-day week is an idea whose time has come," she said.

Dr Mark Downs, Chief Executive of the Royal Society of Biology, said: "The pandemic has taught many of us that long-standing working practices can change rapidly, including the reliance on physical office space".

The trial will run alongside similar pilot schemes taking place in Ireland, the United States, Canada, Australia, and New Zealand.