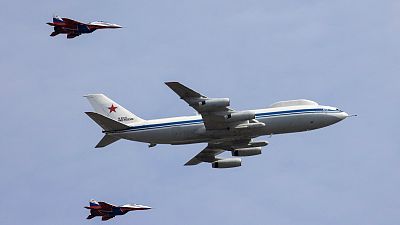 A Russian Il-80 military transport aircraft, also known as the Doomsday plane, and MiG-29 fighter jets fly in formation during a rehearsal for a flypast.   -   Copyright  Tatyana Makeyeva/Reuters
By Jack Ramage  •  Updated: 11/05/2022

The "Flying Kremlin," also known as Russia’s "Doomsday plane," was planned to make its first appearance in over a decade at Moscow’s Victory Day parade on Monday.

However, the huge aircraft designed to protect President Vladimir Putin in the event of a nuclear attack noticeably absent due to weather conditions, according to Russian officials, despite being spotted flying low over Moscow in the days prior to the event.

The menacing aircraft, which is the pinnacle of Soviet-era military engineering, was scheduled to be accompanied by two MiG-29s fighter jets as well as Tu-96 "Bear" and Tu-160 "White Swan" bombers, both of which are capable of carrying nuclear warheads.

Why is it being shown off now?

It’s appearance has raised eyebrows in the international community, seen as being indicative of the rising political tensions between Russia and the West over the former’s invasion of its neighbour.

As the war in Ukraine rages on, it’s been suggested that Putin could be using the plane as a warning message toward NATO and its allies.

In April 2022, Putin condemned weapon supplies to Kyiv from the West, threatening to launch a "lightning fast" response to any nation that intervenes in the Ukraine war.

May 9 has particular importance in Russia as it marks the commemoration of the USSR’s defeat of Nazi Germany in World War II. In recent years, the Kremlin has increasingly used the anniversary to glorify its military and this year’s event has been a flexing of Russia’s nuclear muscle.

In April, Putin made veiled threats about the use of nuclear warheads against countries seen as "interfering" in its "special operation" in Ukraine.

Avril Haines, the US' top intelligence chief, also warned on Tuesday that Putin may turn to nuclear weapons if he sees defeat in Ukraine as a critical threat to his regime in Russia.

What do we know about the 'Flying Kremlin'?

The Flying Kremlin is a Russian-made Ilyushin Il-80 plane, a modified version of the Il-86 passenger and cargo plane.

The aircraft is essentially an airborne command post with special communications equipment placed within a dome on its fuselage that reportedly prevents exposure to electromagnetic pulse attacks.

In the case of a nuclear exchange, Russia would use the aircraft to ensure a continued chain of command and communication, for retaliatory attacks or to move troops on the ground.

The aircraft can also be refuelled mid-flight, allowing the vehicle to stay in the air for long periods of time.

Of course, Russia is not the only country to possess an airborne command centre of this kind.

The United States is believed to have a fleet of four "Doomsday planes" known as the E-4B "Nightwatch, which offers similar capabilities for US leaders to direct forces or a tactical nuclear response in the event of an attack from the air.

The E4-B is another Cold War-era hangover, commissioned first in the early 1970s.