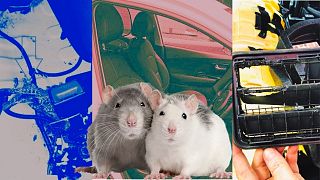 Rodents have devoured Samil Sanal's electric car, causing more than €5,000 in damage that neither the car's warranty nor his insurance will cover.   -   Copyright  Euronews/Canva   -
By Natalie Huet  •  Updated: 09/04/2022

When Samil Sanal started his electric car for a regular day of work as an Uber driver in February, all the lights on his dashboard began blinking.

He never would have guessed what was going on under the bonnet of the €30,000 EV.

Deep in the entrails of Sanal's Kia e-Niro, an electric crossover, one or several rodents had gnawed away at big chunks of wiring, causing more than €5,000 in damage that neither the car's warranty nor his insurance will cover.

“Rodents made a picnic out of the Kia,” Emma Sanal, his wife, told Euronews Next.

The couple and their two children live near Lyon, France, in a house with a garden close to the Rhône River. Two older cars parked outside right next to the Kia were left unscathed, they said.

Mice or rats nesting in a warm vehicle is not a new phenomenon, and there’s no suggestion that they prefer EVs to traditional petrol or diesel cars.

But car dealers and owners suspect new environmentally friendly materials used in auto parts may be attracting more wildlife than before.

A Google search for “rats ate my car wires” returns dozens of pages of results, from local news stories to forums where users trade tips to repel rodents.

In the United States, several class-action lawsuits have been filed against other big carmakers in recent years, alleging that soy-based products were to blame for infestations of hungry animals. These court cases were later dismissed.

Back in Europe, the trade group representing auto part suppliers, CLEPA, says all materials go through testing and are designed to resist misuse by humans or animals - rodents included.

It says it has no evidence that biodegradable materials used in modern cars - such as soy, hemp or corn - are more at risk.

“We also know about insulation material used under the hood or electric and water conveying cables which martens destroyed [Editor’s note: martens are weasel-like mammals]. These materials were not bio-based,” a spokesman told Euronews Next.

How to keep rats away from cars

Kia France said that while the company sympathises with the Sanals, its warranty won’t cover the damage done to their car because it results from “an external attack”.

“This issue is rare but known to all the players in the auto industry,” a spokesman said.

Some insurers have in fact recently changed the terms of their insurance policies and provide tips to prevent this kind of damage, such as keeping the car clear of food items, the spokesman added in an emailed statement.

He attached a photo of what he suspected were crumbs under the cushion of the back seat, saying these “could have been what attracted rodents into the car”.

A second photo showed the rodents had also devoured the seatbelts, which are made of Nylon and not a plant-based material.

The Sanals’ insurance company, Axa, said it doesn’t cover damage inside a car when caused by animals, and that “it’s preferable to park your vehicle, whenever possible, in a closed and secure space” to prevent creatures from sneaking into it.

Sanal parked his car right outside his house and left it charging at night.

The mechanic looking after the Sanals’ car, who did not wish to be named, confirmed that their case is not unique. Each year, his dealership sees about half a dozen vehicles chewed up by rodents.

The extent of the damage in this instance, however, was striking, he said. The car’s main wiring harness - its electric heart, where up to 10 km of cables connect - was largely devoured.

Fixing the wires one at a time would be too time-consuming, so the whole harness has to be changed, he said.

Given the supply shortages plaguing the auto industry since the start of the COVID-19 pandemic, ordering the parts and fixing the car could take at least another four months.

Sanal, who bought the EV second-hand for €27,000 last year for his gig work at Uber, has now taken a temporary job as a night market vendor.

But the couple had borrowed money from relatives to pay for the car, and the whole situation has turned into a nightmare.

Sanal says investing another €5,000 into his first electric vehicle, which he loved but only used for a couple of months, is a big ask.

“I want to know: if I put more money into fixing my car, who can guarantee that this is not going to happen to me again?”

His mechanic said he couldn’t promise that, but that there are €20 rodent repellents that owners can spray on their car occasionally.

“The dealer told us that would be free of charge,” Sanal said with a sigh.

Are Twitter's exiles set to stage a return after Musk's takeover?