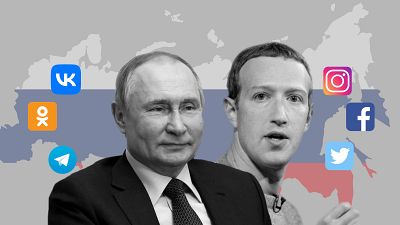 As the war in Ukraine enters its second month, hundreds of news outlets and social networks have vanished from the Russian web amid efforts to crack down on domestic dissent over the conflict.

Earlier this week, a Russian court found Meta, the parent company of Facebook and Instagram, guilty of “extremist” activity related to the company’s earlier announcement that it would permit messages urging violence against Vladimir Putin and Russian troops in Ukraine.

Meta has since narrowed the scope of the guidance, saying it would prohibit calls for the death of a head of state.

The platforms had already previously been blocked by Roskomnadzor, the Russian media watchdog, and the exact implications of this ruling remain unclear.

And while many can still access these sites using VPNs, others are turning to other popular Russian-owned alternatives like Vkontakte or Odnoklassniki.

Some experts, however, remain doubtful that Russia will be able to recreate the social media giant’s reach and monetisation potential with domestic alternatives, at least in the short term.

"If you think about the younger generation which used Instagram and Facebook for self-promotion, monetisation - Vkontakte or Odnoklassniki - they're not platforms which are linked to this prestigious progressive young audience," Dr Galina Miazhevich, a Senior Lecturer at the School of Journalism, Media, and Culture at Cardiff University, told Euronews Next.

"So right now, the younger audience is considering what to do both in terms of economic monetisation but at the same time, security and safety," Miazhevich said.

Rashid Gabdulhakov, an assistant professor in the media department at the University of Groningen, believes Russian Instagram users who have used the platform to generate income will migrate to domestic alternatives like the proposed "Rossgram" platform - which is set to officially launch next week - if advertisement will only be possible on them.

"That means that once again, the country will be shifting towards this digital Iron Curtain, where it has domestic platforms, domestic entertainment, domestic discourses that are state-approved and less and less access to, in this case, real information about what's going on," he said.

How to save the Amazon? Brazil company says NFTs are the answer

Which are some of the Western firms still operating in Russia?