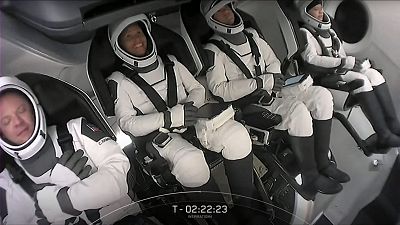 Elon Musk's SpaceX has launched a crew of four amateur astronauts into orbit, in the company's first foray into the growing space tourism industry.

It is the first time a spacecraft will have circled the earth with no professional astronauts on board.

The four - two contest winners, a health care worker and their billionaire sponsor - will spend three days orbiting the globe in SpaceX's Crew Dragon capsule before splashing down in the Atlantic Ocean this weekend.

The capsule and Falcon 9 rocket blasted off from NASA's Kennedy Space Centre in Florida at 1:02 am CEST on Thursday.

The four crew on board SpaceX's "Inspiration4" launch include a billionaire who made his fortune by founding a payments processing company in his teens and a health care worker who beat bone cancer as a child.

The mission was conceived as a fundraising opportunity for a children's cancer hospital in Tennessee, and claims to have raised almost €100 million in donations.

The mission will see the Crew Dragon capsule orbit the earth at an altitude 160 kilometres higher than that of the International Space Station.

Online payments billionaire Jared Isaacman, who paid for the flight, noted upon reaching orbit that few people have been to space — fewer than 600 over 60 years. But he added, "Many are about to follow. The door's opening now and it's pretty incredible".

Their automated capsule has already been in orbit: It was used for SpaceX’s second astronaut flight for NASA to the space station. The only significant change is the large domed window at the top in place of the usual space station docking mechanisms.

An accomplished pilot, Isaacman persuaded SpaceX to take the Dragon capsule higher than it’s ever been. Initially reluctant because of the increased radiation exposure and other risks, SpaceX agreed after a safety review.

Who are the crew?

Jared Isaacman, 38, is the billionaire who funded Thursday's launch. Isaacman reportedly paid some €170 million for all four seats in the Crew Dragon capsule, although he and SpaceX have not confirmed the figure.

He made his money through the payments processor Shift4 Payments, which he set up in 1999 at the age of 16.

Isaacman is also a trained pilot, who has flown jets in the Black Diamond civilian aerobatics jet squad and co-founded a private air force of fighter planes for military training called Draken International.

Sian Proctor, 51, is a professor of geoscience and former NASA astronaut candidate.

She is only the fourth African-American woman to fly to space.

Physician assistant Hayley Arcenaux, 29, lost part of her left thigh and knee to bone cancer when she was 10 years old. She was treated at St Jude Children's Research Center in Memphis, Tennessee, the children's cancer centre where she now works.

Arceneaux has said she was motivated to take part in the spaceflight to show her young patients "what life can look like after cancer".

The final crewmember is Chris Sembroski, 42, a data engineer at US defence company Lockheed Martin.

He won his seat in a lottery fundraiser for the St Jude cancer centre. However, Sembroski wasn't the initial winner - a friend won a place on the launch but asked Sembroski to take it instead.