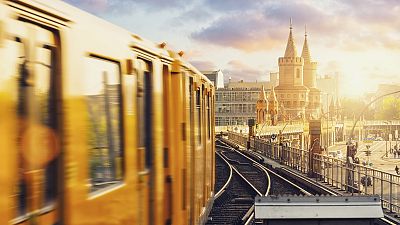 Though shattered by Allied bombing raids during the Second World War and repressed by grim Cold War concrete, Berlin’s Potsdamer Platz somehow emerged from the rubble to reclaim its place as one of the city’s - and Europe’s - busiest intersections.

And while the grand old hotels from the turn of the century have been replaced by gleaming skyscrapers, the flow of traffic in the summer of 2021 appears as strong as ever.

With cars, bicycles, e-scooters and pedestrians hurrying past each other while S-Bahn and U-Bahn trains rumble underground, it feels as if this iconic Berlin crossroads is back to its pre-pandemic self. But is all as it seems?

What will the long-term effects of the pandemic be on mobility in cities across Europe like Berlin?

Where mobility was hit the hardest

As mobility ground to a dramatic halt in March 2020 as the effects of the COVID-19 pandemic became clear, questions were raised that may not have been asked for another decade.

The elevated concern regarding the climate and how humans want to live and move together became issues that were impossible to ignore. Cities were at the heart of those questions.

The car is actually the winner from the pandemic situation, together with the bike, and the big loser is the public transportation system and aviation.

"The pandemic had a huge impact on mobility," said Professor Dr Meike Jipp, Director of the Institute of Transport Research at the German Aerospace Center.

"Here in Germany, we observed that there was an immense decrease in mobility both regarding the kilometres travelled per day, but also regarding the number of trips conducted per day".

With the now-decommissioned Tegel Airport as its dramatic backdrop, Jipp was speaking at the Disrupted Mobilities discussion seminar hosted by the annual Berlin Questions conference and she believes that public transportation will be one of the areas most negatively affected by the pandemic.

"Before the pandemic, you drove by car to the next station then took the train to go to the city. If that was your routine behaviour, today you would just take the car to drive to the city," said Jipp.

"The car is actually the winner from the pandemic situation, together with the bike, and the big loser is the public transportation system and aviation.

"So, people are choosing to be mobile in individual transport modes - they're basically afraid of getting ill or of infecting themselves. That was the huge change and it’s still ongoing".

Earlier this year, a global survey by transit app Moovit asked people how COVID-19 has affected their use of public transport. It revealed that up to one-third of people in some cities have stopped using public transport because of the pandemic.

And it’s not just in capitals like Berlin where this trend is happening. In the Greek city of Thessaloniki, 34.3 per cent of people no longer use public transport because of the covid concerns and almost 70 per cent of respondents said they would prefer more buses on the road to lessen the chances of vehicles being uncomfortably full.

"It's more important to think of how can we regain trust in the public transportation mode, or how we can motivate people to use their bikes," said Jipp. "There are many people who could use a bike to go somewhere, but they're currently using their own cars".

How COVID has pushed European cities towards greener mobility

In one sense, the car is indeed a winner of the pandemic but its long-term future is on far shakier ground as cities across Europe look towards greener visions of mobility in the coming years.

Barcelona, for instance, plans to convert 21 streets - totalling some 33 km - into pedestrian green spaces with more room for those on foot alongside additional cycling infrastructure.

Though there has been some opposition from local businesses complaining that it’s now harder for delivery drivers to access their premises, Barcelona’s chief architect Xavi Matilla argues that the pandemic has shown that if cities do not become greener, more people will leave for rural areas with better air quality.

"The pandemic has functioned as a magnifying glass that has made us see that health should be one of the central aspects in the management and planning of the city," said Matilla.

Paris is another large European city that has begun to make striking changes in the face of concerns about emissions which have been accelerated by the effects of the pandemic.

"I think the big trend that will happen in Europe is that you'll start getting post-car cities," said Ross Douglas, founder and CEO of Autonomy Paris, a global event on sustainable urban mobility.

Also speaking at Berlin Questions, Douglas noted how much the French capital has focused on bicycle lanes.

"Paris has moved in that direction with a very simple infrastructure change with the cycling lanes. They put 150 million euros into cycling infrastructure and you're now seeing a 50 per cent increase in cycling year on year, over the last two or three years," he said.

"What Paris is trying to do is that it wants people to have active mobility walking and cycling on the streets".

Despite the recent rise in popularity of electric vehicles and their obvious clean improvement over traditional combustion engine cars, Douglas believes the car’s time in the spotlight is limited.

"Governments will be looking to reduce carbon emissions through changing personal mobility. And that's going to create a huge amount of pressure for people to change," he said.

"I think what we will see first of all is a shift from combustion cars to electric cars - like what you're seeing now - but then you'll see a shift away and pressure away from car ownership because even an electric car has a high carbon embedded footprint in the manufacturing process".

While the thought of moving away from cars altogether may sound far-fetched, Douglas may have a point if concepts such as the "15-minute city" begin to gain traction.

An antidote to dysfunctional aspects of city living, such as long commutes, noisy streets and underutilised spaces, the 15-minute city concept was developed by Professor Carlos Moreno of the Sorbonne and posits a world in which all daily necessities are within a 15-minute walk or bike ride.

Whether ideas like the 15-minute city become a reality or not, the pandemic has challenged attitudes towards mobility that could affect generations to come.