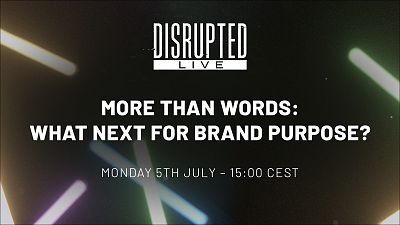 The devastating COVID-19 pandemic and the social movements that have swept the globe this year have intensified scrutiny into corporate responsibility, with brands increasingly called upon to clarify what their purpose is.

For brands, this is a pivotal moment. Where once purpose was little more than a line in a mission statement, it’s now utterly key to consumer choice and a perceived lack of authenticity on some issues can be costly.

Consumers now look for clear communication about the principles and standards of companies they engage in on issues ranging from climate change to gender and race equality following movements such as Black Lives Matter and #MeToo.

'It starts with the CEO'

For Alex Edmans, Professor of Finance at London Business School, the ongoing global health crisis has undeniably had a "significant impact" on consumers' behaviour and what they expect from the companies they buy from.

"I think what this really highlights is that purpose is not just about 'do no harm', but also actively doing good," he told Euronews' Damon Embling during a panel debate on Monday.

He cited for instance companies that quickly repurposed some of their activities to help provide much-needed products to face the pandemic — such as businesses that typically make alcohol-based products that shifted to manufacture hand sanitiser.

"I think as society understands that businesses have tremendous power to use the expertise and use the resources at their disposal to create value towards wider society, then there's greater demand from citizens and in particular customers in order to do this," he explained.

The sanitary, economic and social upheavals that have rocked the world over the past few years have also lead to a "real shift" in the way organisations think about their own role in the world, Lewis Woodward, Global Head of Brand & Communications at the real estate company JLL, told Euronews.

"Quite honestly, shareholders and employees and stakeholders have a higher expectation nowadays than they did perhaps 10 years ago" and "it starts with the CEO."

"You've got to have an organisation that is led by somebody who understands his role or her role in being authentic around the purpose," he went on.

Watch the full debate back here:

So what constitutes a purpose?

"I think it requires a deep-rooted commitment that goes far beyond the sort of day-to-day of what's in trend now, what's in vogue now, what consumers are paying attention to and retweeting and liking on social media and also going beyond what you're hearing today, but looking at tomorrow's issues and seeing down the line what impact you can have," Erinch Sahan, Chief Executive, World Fair Trade Organisation, said during the debate.

"The litmus test I always use is when a trade-off jumps up, how does a company behave? It's very easy to cherry-pick those things that don't undermine your bottom line, that have a very strong, clear return on investment. What about the ones that don't?" he carried on.

"Living the purpose," she explained, equates "walking the walk, making sure that it translates all the way through to the supply chain, to the manufacturing, to whatever it is you’re doing behind the scenes that your consumers and customers do not see, is absolutely critical."

"And some people think that just printing a label on the pack or talking about it is enough and it certainly isn’t. I think people are evaluating things much more thoroughly now," she highlighted.

The panel of experts all agreed that the purpose of a brand should be linked to its core business. A clothing company might for instance make labour rights part of its purpose, working, for instance, to uplift workers in its supply chain, especially if they're in developing countries, out of poverty. A food company may take issue with food waste or work with fair trade, or organic suppliers. A real estate company could make climate change mitigation part of its purpose as the building sector accounts for 40% of global carbon emissions.

A purposeful approach usually brings reward, according to Edmans, including "higher long-term returns". Studies have also shown, he said, that "60% of customers are willing to pay a premium for socially responsible products."

Research carried out by Accenture over the past year involving 25,000 people from 22 countries also found that half of respondents globally expected to engage with brands differently going forward with brands' purpose seen as a key driver for selecting a product.

Younger people, Woodward flagged, "want to join an organisation that gives them a great opportunity to professionally develop and have a fantastic career but they also want to do good."

"They want to know that their effort is going into something bigger and that bigger is more than a paycheque at the end of the year or a promotion three years down the line. It's being able to go home and talk to your friends and families and your own children about the difference that your organisation is making on the global scale, however big or small that change might be," he said.

"It’s very easy to talk about sort of natural this, you know, upcycled and things that aren’t quite verifiable and they’re starting to feature very heavily now in marketing campaigns and I think those sort of claims will eventually fall through and people will see the lack of authenticity," he warned.

Brands should also restrain themselves from necessarily taking a stance on the issue du jour unless it pertains to its activities or stated core values.

"I do think purpose is really important, but we shouldn't expect companies to take a stance on every issue, particularly if it's an issue on which there might be reasonable disagreement," Edmans said.

"We do have to be a bit careful if we are putting too much into companies and the investment management industry, the things that should be dealt with through the political process where everybody is equal and everybody has a vote," he concluded.

How brands are responding to consumer demand to live green